Taking place in open air locations of beauty and tranquility, they could last as long as a week. The days were full of prayers, lectures, and hymn-singing. Initially, only adults attended. The woodland settings, rustic communal tents and dining, and spontaneous religious activities were intended to allow participants to communicate directly with God.
As campgrounds grew in size and number, they became permanent summer communities. Participation became a family affair. Communal tents sponsored by church societies were replaced by individual family tents and eventually permanent, usually frame  dwellings. While the first houses resembled tents, they soon developed into larger cottages. Over time, campgrounds became places of recreation as well as religion and were seen not only as places for the seriously devout to worship, but also as resorts where families could come for a spiritually and physically healthy vacation.

It was in this phase of campground development that TI Park has its roots. Led by John Dayan, a former Methodist circuit rider, the park was dedicated in 1875, when most campgrounds had passed through the initial, more primitive period and had become permanent, seasonal communities. In addition and more broadly, industrialization was changing society in many ways, including the development of a middle class, which was able to actually take vacations and leave crowded cities using the new transportation systems that were built during and following the Civil War.
What follows is a brief history of Thousand Island Park, located on Wellesley Island in the St. Lawrence River. A more detailed history may be found in Thousand Island Park: One Hundred Years and Then Some (Jacox and Kleinhans) available in the TI Park library and the Thousand Island Park Landmark Society resource center.

Growth, Disaster, and Recovery
End of An Era
The Roaring Twenties and Dirty Thirties
Wartime and Post-War
Centennial and Onward
So What Does All of This Mean? 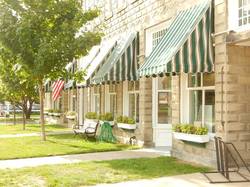 After one hundred and forty years, what does the history of Thousand Island Park tell us about this summer community on the St. Lawrence?  The 19th-century roots that gave us a place where adults and children could holiday in a place of physical beauty remain strong, as does the communitarian foundation of the Methodist campground.

It is also a place of generational longevity. In 1925, when TI Park celebrated its 50th anniversary, a significant number of participants had been in the park for at least 40 years. That hasn’t changed. Now, many residents are fourth and fifth-generation TI Parkers.

TI Park is smaller.  We have now about forty per cent fewer cottages and many fewer businesses from our peak, largely due to the world-wide economic changes in the 1920s and ‘30s and the slow rebound of the community after World War II.  The days of 7,000 people promenading the streets and the river bank on a summer day are no more.

Historic preservation is now fundamental to TI Park. The listing on the National Register of Historic Places carries with it an obligation to preserve our irreplaceable architectural history. The Preservation Code has, over the years, guided exterior changes to buildings, including cottages, and full-on restoration projects such as the Main Dock. The beauty of our buildings now matches the beauty of our natural surroundings.

The importance of program persists, but with a difference. Originally, the Camp Meeting Association organized formal programs of at least one sermon or lecture a day, generally of a religious nature. Over time, the doctrinal element became less prominent to the point where its now limited to Sunday services, yet our current lectures, reading groups, sports programs, and social clubs are built on the early campground community experience. And TI Park is still a great place for kids.

The historic debates about how the Park is financed and governed continue. As in the past, life goes on while the discussions take place.

Thousand Island Park has survived two world wars, a major depression, a number of recessions, multiple fires, and occasional questionable financial management. Despite all of this, it continues, sustained by strong communal and familial ties.